A Fusion of Projection Mapping and Real Escape Game?! Secrets Behind the Development of “Spellbound Supper” A dream collaboration comes to life 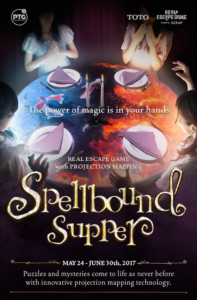 This article was translated from Japanese. You can view the original article here.

Hello! I’m megaya. You may have seen my articles on sites such as Daily Portal Z.

This time, I’ll be writing about a company called SCRAP, which puts on many real escape games.

Before we get started, I just want to make sure; do you know what a real escape game is? (I realize this may be an odd question to ask if you’re already reading SCRAP’s site!)

In 2004, there was a popular PC game with the premise that the player was trapped somewhere, and had to use keys and items to solve riddles in order to escape. A real escape game is a gaming event that brings this experience to life in the real world.

SCRAP has put on a great many real escape games already, but one of their latest projects is an event that makes use of projection mapping, Kinect, and other cutting edge technology.

It’s an event called “Spellbound Supper”. I actually participated in this event myself, and it was incredibly fun! I was also highly impressed by the gorgeous and whimsical graphics, laid out across the table through projection mapping.

While “Spellbound Supper” was planned and produced by SCRAP, the graphic design, projection mapping, Kinect sensing, and other technological development was handled by a company called BIRDMAN (http://birdman.ne.jp/). BIRDMAN is an elite team that handles the very latest in digital promotion. They’re involved not only with online material, but also with interactive installations and productions and real events.

After experiencing the game, I was filled with questions. How were these images produced? And what made SCRAP decide to use projection mapping for a real escape game? I was so consumed by curiosity that I used my status as a writer to request an interview with the creators.

SCRAP Yoshimura:
The first time it occurred to me was in the Tokyo Sky Tree, when I saw my own illustrations projected on a table and brought to life. I thought it was really fun, and that maybe we could use that technology for an escape game.

After that, just by coincidence, we received a commission from BIRDMAN about that very idea. They said they wanted to create a real escape game using projection mapping, and asked us to handle the puzzle aspects. So that was what really started it.

Yes. I was fortunate enough to participate in the planning and production of another event in the fall of 2015, unrelated to Spellbound Supper. It was a promotional event called Café de Paris. When we decided that we wanted to use the newest digital technology to create a real escape game, we asked SCRAP to help us by coming up with the puzzle content.

(This was an event held in the fall of 2015, called “Escape from the White Room”. It was a short game that could be completed in about ten minutes.)

After the success of that event, I thought we could probably do a full-scale 60 minute real escape game with projection mapping. I figured that the visual aspect could reach a broader audience, including children and people who don’t like puzzles as much, so this time I went to BIRDMAN myself to discuss it. SCRAP Yoshimura:
But when I went to talk to them, I really didn’t understand the technology behind it at all. I went with a head full of dreams about projection mapping and sensing technology. I’m sure I asked for a lot of things that were totally unreasonable.

BIRDMAN Izumida:
It’s true that some of the content you suggested at first was beyond our current capabilities. (laughs) But with BIRDMAN’s practical knowledge of projection mapping and sensing technology, and SCRAP’s creative ideas, puzzle-making skills, and production experience, we were able to carry out our plan. I was surprised by just how much the story expanded at each of our meetings, as SCRAP brought more and more ideas to the table. I realized that people who spend their time coming up with puzzles must have a totally different way of thinking. SCRAP Yoshimura:
There were a lot of technical things I didn’t understand, so I created stories and puzzles and held many meetings with BIRDMAN to see if they could be done through projection mapping. We started working on this in about May of 2016, and I think it took about six months to complete the project. Even compared to other real escape games, this one really took a long time to prepare.

BIRDMAN Izumida:
BIRDMAN handled all of the projection mapping CG, graphic design, game program development, and sensing aspects of the project. We worked on the design and development in parallel, and even after the event was planned out, it took another three months just to develop everything. We met to discuss our progress many times, and unfortunately, a few ideas had to get axed along the way.

SCRAP Yoshimura:
Originally there was a puzzle that used a spoon, and completely different items that appeared after the puzzles were finished. We really did a lot of trial and error. I actually feel nostalgic thinking back on our prototype plans we had six months ago! (laughs) BIRDMAN Izumida:
The game program for Spellbound Supper includes multiple stages. Each one can be played independently, but there’s also a complex connection between the different graphics displayed for each separate stage, and it was really tough managing all of that at once. Did you have any trouble with the game aspects, Saito?
BIRDMAN Saito:
Well… in one of the puzzles, there are many different choices that the players can make, and we had to set up the game to respond to a huge number of different actions. That was pretty tough. Allowing for every possibility, we found that there were 120 possible variations, and we struggled a bit with managing all those conditional branches. It wasn’t possible to actually implement 120 patterns, so we had to work hard to narrow those down as well. We just kept testing and adjusting as we went along. BIRDMAN Izumida:
Debugging was a lot of work too. We’d have to run through the whole game each time just to find a single bug, and even at its smoothest, the game took at least 20 minutes, so the whole process took a lot of time.

BIRDMAN Izumida:
We really put a lot of effort into the graphics that are displayed each time the players solve a puzzle, when the next dish appears. With each course, there are different items on the table, and even the pattern of the table cloth changes. We tried hard to make the designs really interesting and enjoyable. SCRAP Yoshimura:
Since you can’t experience these in other games, I’d say the main points are the magic-like experience using Kinect, and the amazing projection mapping graphics. Most real escape games are totally analog and require a great deal of imagination, and they can be a bit of a challenge at first for beginners and children. But thanks to the projection mapping graphics in this project, you can really immerse yourself in the banquet setting. SCRAP Yoshimura:
And you can also enjoy the experience of moving things around physically. I think this game can be fun for anyone, regardless of age or gender, or whether or not they like puzzles in general. I hope a lot of people try it out!

BIRDMAN Izumida:
The magic is really the main event. Magic bursts out of the rings the players themselves are wearing, and from the wand, too. You really have to experience it. We worked hard to make a game that made the players feel like they were really using magic themselves, so we hope you enjoy it. BIRDMAN Saito:
The items in front of your eyes change in response to your own actions, and I think anyone can have fun solving these puzzles. And there really are a lot of different patterns for the projection mapping graphics, so I think you can experience something you’ve never seen before.

SCRAP Yoshimura:
I’d like to explore the possibilities of the wand and other items. For example, I think it’d be really fun if you could write the word “chick” and a little chick appears. And since this time we went with my own fantasy setting, a magical banquet, next time I’d like to try something more targeted toward boys. Maybe something set in space, or a robot factory… There are a lot of things I’d love to try with projection mapping!

BIRDMAN Izumida:
This time we did an indoor event, but I’d love to try it outdoors next time. Like we could hold an event in a big open field or park at night, and use projection mapping to show arrows leading to the next destination, or something like that. SCRAP Yoshimura:
I’d love to do that! Or maybe in an abandoned hospital?

BIRDMAN Izumida:
That’s a great idea! I can send you an estimate anytime! (laugh) The interview left me with high expectations for another project from them. I was lucky to hear about the production from both companies involved.

I learned that there was a lot of work involved to create this real escape game with projection mapping. And I’m sure it wouldn’t have been possible without the combined talents of SCRAP and BIRDMAN.

I’m sure that after hearing these behind-the-scenes secrets, the game itself will be even more interesting, so if you haven’t already, please go try a real escape game!

Learn more and buy tickets to the Spellbound Supper here! Saori Yoshida
A member of the SCRAP staff. As a real escape game director, she’s already brought many games into the world. She’s also the lab director at Dougenzaka Himitsu Kichi Labo (Secret Base Lab), where she’s put on a variety of events, such as “Real Relationship Game”, “Ex-Boyfriend & Ex-Girlfriend Flea Market”, and “Graduation Thesis Night!”  She’s active in a broad variety of fields.

Ryusuke Izumida
A developer and member of the BIRDMAN staff. He’s in charge of such things as sensing, device production, and application development. Takumi Saito
A developer and member of the BIRDMAN staff. He’s in charge of game application and device development as well as web programming.