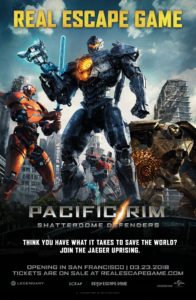 1. Eligibility. This contest is open in residents of the United States of America. Applicants must be 18+.

2. Contest Period. The Contest shall take place commencing on March 17, 2018 at 5:00PM and ending March 20, 2018 5:00PM Pacific Time (the “Contest Period”). All entries must be received during the Contest Period to be eligible to win a prize.

3. How to Enter. To enter the Contest, Entrants must: (i) be a registered user of Twitter®; (ii) become a follower of Realegame’s Twitter feed during the Contest period by visiting one of the Twitter pages located at http://twitter.com/realegame and clicking the “Follow” button while logged into your Twitter account; and (iii) during the Contest Period, @realegame will post a call-to-action message for followers which the entrant must retweet to be eligible to win. The following day after the end of the contest, winners will be randomly drawn from the eligible entries received during the giveaway.

Any attempt by any person to obtain more than the stated number of Entries by using multiple/different email accounts, or any other methods including, without limitation, script, macro or any automated or other means which subverts the entry process, will void all of that person’s entries and that person will be disqualified. We may disqualify any such entry at its sole discretion. No purchase Necessary.

4. Odds of Winning. Odds of winning depend on the number of eligible entries received.

5. Prize and Winner Notification. Three (3) prize winner will be selected by random drawing during the Contest Period from among eligible entries received. The winner will receive a prize consisting of: Two (2) tickets to Real Escape Game x Pacific Rime: Shatterdome Defenders. Winner will be notified in a timely fashion by @Realegame.

SCRAP shall endeavor to notify potential winner via Twitter Direct Message to communicate a code in which entrant may utilize to receive their tickets. Winner notification not acknowledged by potential winner within forty-eight (48) hours after outreach from SCRAP may be forfeited at our discretion and awarded to an alternate winner selected by SCRAP. No substitutions or exchanges (including for cash) of any prizes will be permitted, except that SCRAP reserves the right to substitute a prize of equal value for any prize. prizes are awarded “AS IS” and WITHOUT WARRANTY OF ANY KIND. After winner notification and verification, prizes shall be sent in a timely fashion unless any difficulties occur obtaining the prizes, if this occurs we shall inform the winner on the status of their prize. All prizes will be awarded in accordance with these Official Rules. Limit one prize per household or address.

This promotion is in no way sponsored, endorsed or administered by, or associated with, Instagram or Facebook.